What Our Nights (& Days) Look Like These Days (Part 2)

These days our nights are going better (and then a little worse and then a little better again). Grayson has started "sleeping through the night", which means that we usually put him down between 11-11:30 p.m. and then (most nights) he doesn't wake up again until 5:00 a.m. or later. Since he's been reliably sleeping through the night, we are (finally) transitioning him to his crib in his room. Until now we'd relied on the nature sounds and vibration on his Pack 'N Play in our room.

During the day, Grayson still much prefers to be held when at all possible. He likes to snooze on our shoulders most of the day or he's content in his car seat if we're on the go. I've been trying to set up a napping/eating schedule, but Gray doesn't seem to be quite ready for that yet. Every time I think we're really getting somewhere, things get thrown out the window and we start all over again. Today has been a prime example of that. Little by little Gray is growing up!

Grayson turned two months last week and is weighing in at about 12 pounds. His reflux(?) got better and then worse again and now seems to be doing slightly better again. Due to this last reoccurrence we're not totally convinced that it's reflux that is causing the problems during his feedings. Since we aren't sure what else to contribute it to, we're just sticking with what we're doing for now. Despite a few set backs now and then, Gray is continuing to grow like a weed.

Here are a couple of pics to compare Gray from his 1 month to his 2 month birthday. 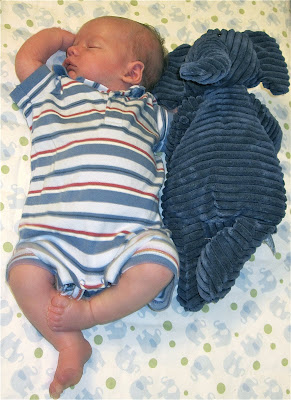 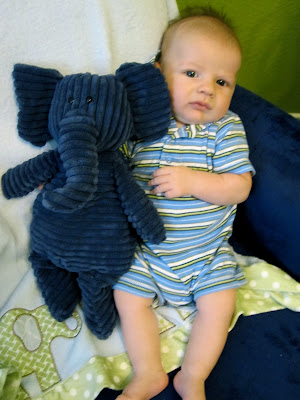