A HUGE thanks to Mark for an absolutely worderful gift: tickets for Bobbie, Holly, Britt, and me to Cirque du Soleil's Corteo. We had an absolutely wonderful time! I had never seen a Cirque performance and had always longed too. It was more than I could have ever imagined. The performers were so graceful and the costumes beautiful. There were too many exciting scenes to choose a favorite. The show was 2 hours long and flew by in just minutes. I am now an official Cirque junky! It only took one show to completely lure me in! 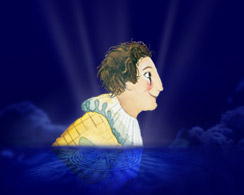 Here is Cirque's much more elegant and detailed description of Corteo:

Corteo, which means "cortege" in Italian, is a joyous procession, a festive parade imagined by a clown. The show brings together the passion of the actor with the grace and power of the acrobat to plunge the audience into a theatrical world of fun, comedy and spontaneity situated in a mysterious space between heaven and earth.
The clown pictures his own funeral taking place in a carnival atmosphere, watched over by quietly caring angels. Juxtaposing the large with the small, the ridiculous with the tragic and the magic of perfection with the charm of imperfection, the show highlights the strength and fragility of the clown, as well as his wisdom and kindness, to illustrate the portion of humanity that is within each of us. The music, by turns lyrical and playful, carries Corteo through a timeless celebration in which illusion teases reality.

(Toward the end of the show a tragedy occurred when a performer fell in the middle of a stunt landing on his head and neck. He was whisked off stage by numerous EMTs and other emergency response personnel. Holly read an update the following day that the performer had been taken to the hospital and was in recovery.)